The winter doldrums have finally hit New England. Personally, I can’t think of a better time to reminisce about my October trip to St. Croix for the Coral Reef Swim. 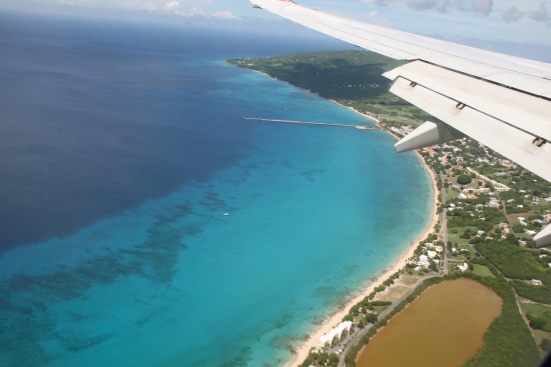 This was our 6th trip to St. Croix for the swim since our first time in 2003. And every year the experience has included the unexpected. This year was no exception. 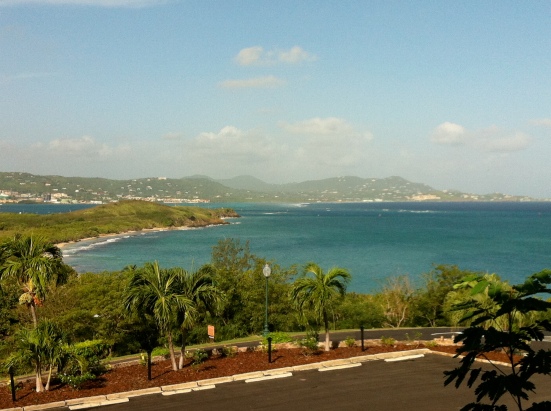 This year, the trip was even more meaningful and special because approximately six weeks before, my son, who is 11, decided to swim the 1-mile distance. A kid who had no interest in any organized athletic events now trained like crazy for a swim race in open water.

Was I nervous? Oh yes! Was it enough time? I questioned that, but also knew that he was truly determined. And he put the training in, for sure. But when it came down to it, would he be able to do it? 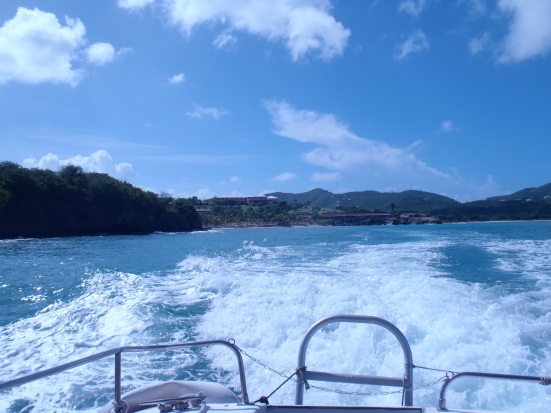 Every year before the swim itself, our trip includes a day of snorkeling at Buck Island Reef National Monument, the usual race departure site for the 5-mile swim. 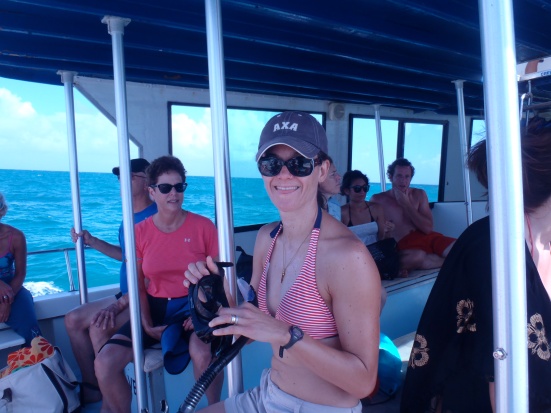 On our trips there, we’ve seen sharks, barracuda, endless lovely fish, turtles, and sadly, the impact of environmental degradation on the reef.

Buck Island has one of the most stunning beaches I’ve ever had the opportunity to visit. Small, yes, but pristine sand and, well, as people who’ve been there know, there’s just something special about it. 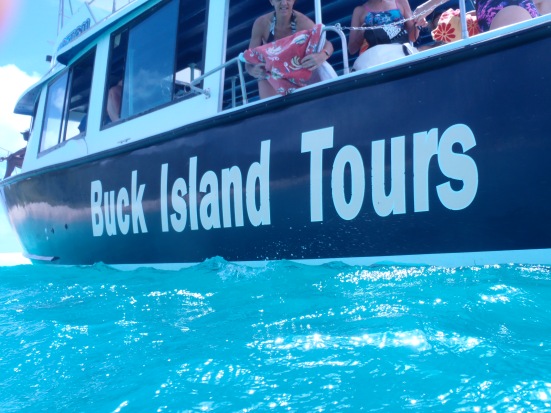 The clearest stretch of beach is where the 5-mile swim usually begins, with the blowing of a conch shell on race morning.

The snorkeling trip always helps me shake out the nerves. And it did the same for my son. 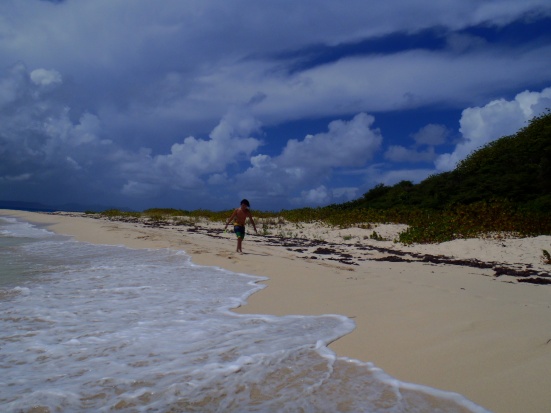 Then it was back to The Buccaneer for more hang out time before race day.

The day before the race, a few of us gathered for a training swim around Green Cay, a small island off the coast of St. Croix. 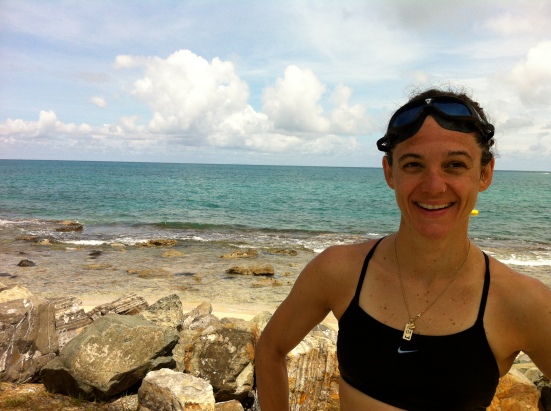 The water was perfect, the waves were delightful, and it was a great way to get into the water and relax as we watched the weather report. (Recognize any Olympians and famous open water gurus in this photo?) We were all happy to swim because the forecast was looking iffy, and yes, the weather was starting to look nasty.

Let’s take a look at the weather on the way in. Yup. Dark clouds. And the sky got darker and darker.

Tropical Storm Rafael was on the way, and no one knew quite where it would hit.

That afternoon, it was time for race check-in and someone was a little excited.

It was a new experience for me to have my little guy get ready for a race. And I found that as much as I was excited about my own race, I was even more excited and nervous for him. Most of all, I was hoping that after all of the training he’d put in, he’d actually get to swim.

Even as we anticipated the storm that night, the sky was stunning.

We spent the rest of the night waiting on the call from race directors about whether or not the swim would go on as planned.

After 5 years swimming this race, it was clear to me that race organizers had made a difficult decision, with racer safety as their primary concern. And as an open water swimmer, it’s important to know that anything can happen. Sometimes, it just isn’t safe to put people in the water.

Does it suck? Yup. Truly.

But better that than a regrettable situation.

That night, the storm came in, but thankfully, it was not as dramatic as anyone had expected. Still, the water was choppy and both my husband and I wondered if our guy was ready for the conditions.

Because it was our son’s first swim, we had already decided that my husband would swim with him, and when w looked at the water, we were confident that was the right decision.

My race started first and again, I was sorely tempted to swim with my husband and son instead. Ultimately, I opted to head to Pull Point with the other swimmers and do the modified race.

I can state with authority that out of 6 times racing in St. Croix, this was the most challenging experience I have ever had there, at least in terms of water conditions. Swells that engulfed us, a current going against us, and a swim that felt ENDLESS. Bcause I tend to blam the conditions of my swim on myself, I spent most of the race thinking I was really, really, really out of shape.

Needless to say, it was a physical and emotional relief to exit the water on the beach at The Buccaneer. Even more of a relief was finding out that everyone else had felt the same way about their swims.

Now, it was all about waiting for my guys to come in!

Because I’m always the one racing, I’ve never been in the waiting on the beach position. Man, does that suck! Swimmers are hard to see when they’re out in the water!

It felt like forever of waiting for them but then, there in the distance were two pink caps swimming together. It took ages for them to reach the shore – at least in my psycho excited state!

Finally, there they were and WOW! My baby brought it home strong!

I need to admit that at this point, I was a completely crazy mother, screaming and jumping up and down with excitement. Totally over the top in every possible way. But come on – wouldn’t you be?

He ran through the finish and looked fantastic.

After? The inevitable crash. Racing is hard work.

Thankfully, he had some very enthusiastic supporters! Alex Kostich, race winner and Aidan’s good friend, was there to cheer him through the finish and congratulate him on his first open water swim race.

Oh, and maybe I should mention this. Mama did okay too. 2nd place woman in the 40-59 age group. Even with a modified distance, I’ll take that with pride. 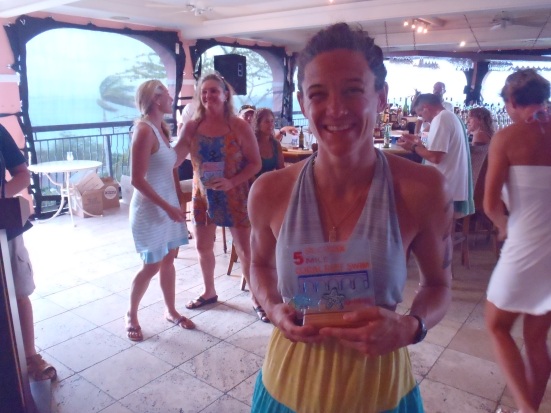 Yet again, St. Croix did not fail to surprise. And yes, we’ll be back again next year!

Shop at Swimoutlet and support Swimcrest!